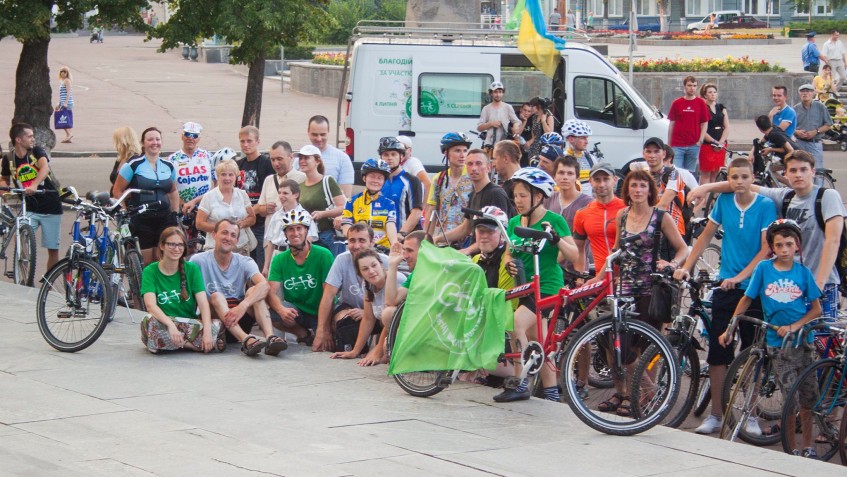 In July 2015, MGO “Modern Format” and Zhytomyr Community Foundation organized charity bicycle race “I See! I Can! I Help!” in Zhytomyr.

July 8th, 2015 the organization’s team met the participants of the charity bicycle “I See! I Can! I Will!” from Rovno and went together to the final destination – the Korolyova square.

The cyclists with sight and blind cyclists crossed over 2,000 kilometers on bicycles-tandem. The route started from Lviv and went through Chernivtsi, Ivano-Frankivsk, Rivne, Zhytomyr, Vinnitsa, Kyiv and small towns and villages.

The goal of the project is to show that blind people – are equal members of society, and the ability to have a sight goes far beyond the physical view.  The funds raised during the charity bicycle race were spent on the improvement of the first sensoteca in Ukraine located in Lviv.  A sensoteca is a special educational space for blind people.

We are grateful to all who took part in the charity bicycle race in Zhytomyr and met our guests from Lviv.

The organizers of the charity bicycle race are a public organization «Institute of Ukrainian Studies” and St. John Bosco Academy of Human Rights.

A press conference was held in the conference hall of Oleg Olzhych Regional Universal Scientific Library on July 9th, at 10:00.

LMMHO “Institute of Ukrainian Studies” already has successful experience in implementing similar projects. The Ukrainian charitable marathon “Run for Children» was held in 2006 which collected $ 50 000. All funds collected were spent on equipment to Lviv maternities.

Mykola Pekh is the Head of the public organization “Institute of Ukrainian Studies” till June 2014 and one of the organizers of the marathon. Last year Mykola Pekh passed away, hasn’t fulfilled his second big dream – charity bicycle race for blind people. That is why this project is dedicated to the memory of Mykola Pekh.

At the age of twelve Mykola Pekh completely lost his sight, and in a few years left to study in American FLEX program.  Mykola is a graduate of the Faculty of International Relations of Lviv University, Chevening scholarship winner and the CUPP trainee in Parliament of Canada. Mykola Pekh was a participant and organizer of different international and national projects.

ACTUAL PROBLEMS OF IDPs IN UKRAINE HAVE BEEN DISCUSSED AT THE INTERNATIONAL HUMANITARIAN CONSULTATIONS IN GENEVA
Uncategorized,

Zhitomir Community Foundation is the winner of the best presentation in the Internet
Uncategorized,